Glimpses of grace seen in the everyday

Joseph came from a long line of deceivers.

His great-grandfather Abraham passed off his wife as his sister to save his own skin—twice!

His grandfather Isaac did the same.

His father Jacob cheated his twin brother Esau out of his blessing by passing himself off as his brother, deceiving their blind father.

His great-uncle Laban cheated his dad (Jacob) by passing off his older daughter as the younger one behind the bridal veils.

His own brothers passed Joseph off as dead after selling him as a slave to Egypt.

So what was Joseph to do when faced with continual sexual harassment on the job?  Would he also cheat his employer by giving in to that seductive wife?  What about his job security?  After all, as a slave he had no rights at all, even though he was in charge of the household.

By God’s grace, Joseph had the conviction and courage to break the chain of deceit, refusing to save his own skin.  He would rather lose his job and be thrown into the dungeon for years than do what he knew in his heart was wrong.

Do you and I dare to be a Joseph? 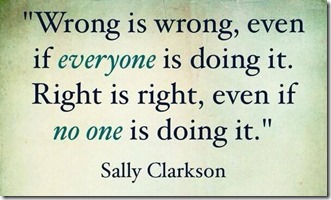 Comments on: "Breaking the Pattern" (1)